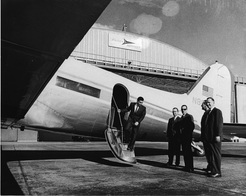 Ronald J. Guerra, President
President Ronald J. Guerra joined our operations as a captain in the Kaiser companies flight department. He has been president since 1979 when he and other executives purchased the organization following the voluntary liquidation of the Kaiser Industries Corporation.  Ron has more than 21,000 hours of flight time and has flown to six continents. He is licensed as a command pilot in the Gulfstream GI-II-III-IV-V aircraft, along with other airline ratings.

He has been a team leader for 40 aircraft modifications, including 18 Gulfstreams plus Hawkers, Falcons, JetStars, LearJets and Citations. Mr. Guerra was the recipient of the John P. “Jack” Doswell Award for meritorious service to aviation in 2005 by the NBAA.  His expertise, experience and Aviation Industry Leadership gets passed on to you, our client, in the form of the highest safety and customer service standards in the aviation industry.

Rob Guerra, Senior Vice President of Operations & Chief Pilot - FAA Part 121 Operations
Rob has been flying airplanes since he was a young man. He has recently taken on greater administrative and operational duties within the company. He joined KaiserAir in 1994 as a pilot after his graduation from California State University – East Bay with a bachelor’s degree in business administration.

Rob is currently a senior captain and an FAA-designated Check Airman, with 20 years of experience flying Citation, Hawker, Gulfstream and Boeing jet aircraft. He has domestic and international flight experience and has more than 8,500 hours of total flight time. In addition to being an outstanding pilot, Rob is an avid sportsman and car enthusiast.

Tim Slater, Chief Pilot - FAA Part 135 Operations
Tim Slater was born and raised in the Bay Area and graduated from UC Berkeley with a degree in Physics. Tim joined KaiserAir in 1996 and was promoted to Asst. Chief Pilot in 2000, 121 Certification Chairman in 2008 and Chief Pilot 91/135 in 2018. Tim has flown over 11,000 hours in Hawker, Gulfstream, 2/3/4/5 and the Boeing 737 in the US and abroad. Tim is also the Aircraft Operations Security Coordinator (AOSC) and provides ground training for our pilots and dispatchers.

​Glenn is a licensed A&P mechanic, with FAA designated Inspection Authorization. He was a FAA Designated Airworthiness Representative (DAR) and he holds a Commercial Pilot License as well as a Flight Instructor Rating that he has held for several years. Glenn's previous positions and responsibilities have included Repair Station Manager, Quality Manager for Manufacturing, Chief Inspector, Airport Management, FBO Manager, Flight Instructor, Director of Maintenance and Lead Mechanic.

Rick Brainard, Director Maintenance Marketing & Business Development
Rick joined KaiserAir, Inc. in 2014. He has been in and around business aircraft MRO (Maintenance and Repair) operations for 32 years. Rick has held leadership positions with some of the world's largest aerospace manufacturers as well as both large and small business jet MRO’s. Rick has an extensive background in aircraft modification and STC (Supplemental Type Certificate) projects. Rick holds a commercial pilots license with an instrument rating and has flown over 2,700 hours.